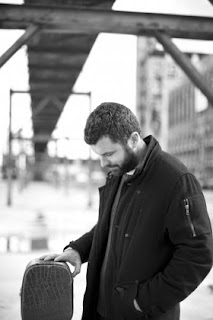 Mick Flannery’s songs usher us into a world which is by times emotional, romantic, dark, insightful and hopeful.  On foot of his latest album By The Rule, the Cork singer songwriter makes a much anticipated return to glór.In 2013 Mick took a notion to go to Germany and Berlin and after a bitter cold winter he came home and then went back and settled in Berlin for seven months and went to work.  The result is his new album By The Rule.
“By the Rule”, then: the sound of Mick Flannery getting comfortable in his skin. The sound of a man at ease with his work. The sound of a master songwriter creating his best work to date.
“It’s never a chore”, Flannery says about the craft of songwriting “The creation is the nicest part, it’s something you always have and you can use it to work through stuff that’s in your head. You have to take it seriously if it’s going to be any good. It’s always my favourite thing, like putting Lego blocks together. You can make a lot of things with Lego.” “
His new album By the Rule is the work of a confident, assured songwriter, someone who knows how to turn a list of nouns, adjectives, verbs and adverbs into graceful, minor-key pen-pictures and poetry which will resonate with the listener.