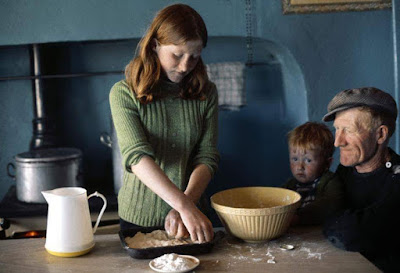 She said she’d lost the knack—not the recipe,
which had never been written down—
but the knack of mixing the dough just so, not too much,
not too little,
so that the moist, buttery loaves rose
into their perfectly rounded shapes,
the cross impressed in the top revealing itself
as the crust hardened, sure as the Annunciation.

It was because my father had innocently asked for soda bread,
the kind he remembered from Ireland,
which she had not made for decades,
that the kitchen was transformed into an assembly line,
batch after batch of dough,
loaves emerging from the oven to cool, be sampled,
then discarded behind the garage as not quite right.

Once, she’d baked the loaves in great iron pots suspended
over open fireplaces, a glowing turf on the lid,
in the thatched cottages at Carane, at Culdalee, at Mass Hill.
Once, she’d turned them out effortlessly every day
as easily as a pot of tea.
Once, she had bricks of ancient peat turf cut from the living bogs
to heat her cottage, cook her food.

Now she was inconsolable as she sat down to her sewing.
Peat smoke, she said with a sigh. Peat smoke.
How could anyone hope to make a good honest loaf
without a smoldering turf fire infusing its delicate flavor?

All that week, the squirrels, raccoons, and crows
feasted on soda bread,
blackbirds and blue jays carrying chunks up into the trees,
crumbs raining down like stardust
seeding a recalcitrant world.